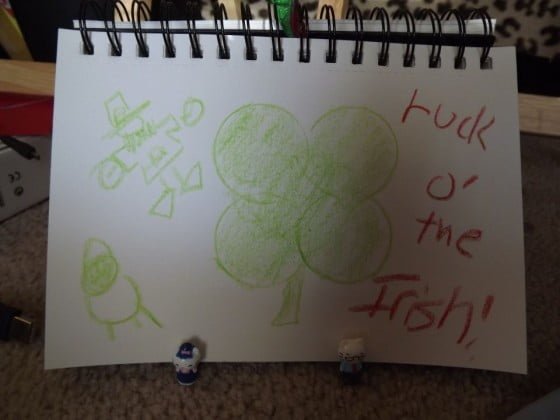 leprechaun Drew Me This!

It was St. Patrick’s Day over the weekend.  I’ve never been visited by leprechauns before.  When I was a little girl, we never left anything out for the leprechaun, and when I moved in with Master, we didn’t really celebrate either.  On Wed or Thursday last week though, Master told me that I’d better think of something good to put out for the leprechauns.  Seeing as I can’t leave the house on my own, I had to scavenge around the house.  I didn’t know what to leave out, but I had one chocolate gold coin (left over from Xmas, shows you how often I eat chocolate!), and I decided to draw the leprechauns a picture.

Master told me that leprechauns are tricky, and you’ve got to distract them by putting things they like in small spaces so they don’t make a mess.  I put the coin under Bearbosa, and the picture under a folding table.  Master said that leprechauns like to play, so that I should leave a crayon under there too.  I did, and then, I went to bed.

When I woke up, Master was already awake, so I grabbed Biggle Piggle and Zeebee, and crawled on the ground with them in my teeth.  Well, Zeebee wasn’t in my teeth, but I kept picking him up with one paw and throwing him into the front room.  (Apple Pig was already up from his security watch the night before).

“Master!  Did the leprechauns come?!”  I squeeled excitedly.  I had no clue what to expect.  Master proclaimed that they did indeed, and I should come and see what they left.  I left Zeebee on the ground and carried Biggle Piggle with me.  We found a new picture in my sketch book!  The leprechauns must have drawn it, because that’s not my style at all!  They also left a container of Squinkies for me (I sort of collect them), and some truffles, and under Bearbosa’s leg was even a can of Arizona iced tea (my favoritest)!  Nom!  I couldn’t believe they brought me so much stuff.

They were very tricksy though, and had wrapped Apple Pig and Collosso Pig up in a blanket!  My mice-ies were even all upside-down in the drying rack!  Naughty, naughty little leprechauns!