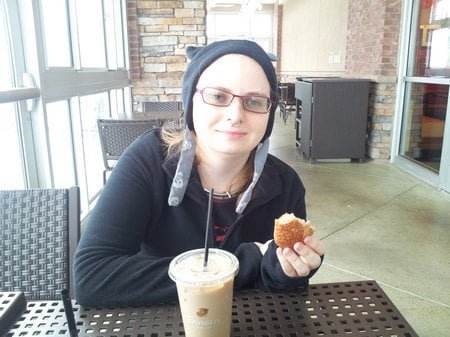 So, Master and me thought we had colds, but, over a week after I got the “plague” he sat down, had me list all my symptoms, and said “Fuck. I think we actually have the flu.” Which does explain why we’re still not quite on the mend. Still, we’re improving – just slowly. Stupidly long work hours are hard on us both. The last time I actually had the flu was three years ago, during the Easter when we first moved here. That was sure fun.

Anyway, when we’re on cold medicine, we can both sort of function like reasonable individuals, it’s just that when it starts running out – we both cower under covers and play xbox, or else just lay there half napping, half staring into nothingness. Fun, yes? Flu sex has been fun too. Interesting, anyway. Heh. >:)

The picture above is from a couple of days ago. Master and me have a sort of tradition of going out whenever there is a major snow storm and we buy a whole grain baguette for part of the day’s meals. Master was feeling generous, and he also got me one of my favorite lattes, iced chai tea (with soy milk). He picked a room no one was in, andhad me sit down so he could enjoy his soda before we left, and gave me a piece of the bread to nibble while I waited for him. I was happy, but definitely feeling (and looking) a bit off.

And, I know I can’t stop blogging about it – but it’s only because we can’t stop talking about it.. Our vacation is coming up in only two days!! We are both beyond excited. The only thing holding me back from being over-the-moon excited is that I’m still sick. Master caught his bug five days before I did though, so he is doing much better and I think he’ll probably be 100% by Friday. I’m still in the middle phase where I want to curl up and die one minute, and feel “okay” while the medicine is working. We haven’t been on a real vacation in about four or five years though. I will be so pissed off if I am sick for it! (I better not be, anyway).

And, getting the flu the day after I got my septum pierced? Yeah, that was bad timing. I will say though, that I am quite impressed with my septum piercing. Despite constant nose-ickiness, the damned thing just couldn’t care less. It’s happy as a clam, and giving me no trouble at all. Love this thing. Not to mention, it makes me feel pretty, even when I feel icky and flu-ey.

So, that’s where I’m at right now. Tonight we have a few more things to do to finish packing (just some things that have to be last minute), and other than that, we’re all bouncy and springy and excited for Vegas and Sin in the City!

8 thoughts on “The Dreaded Flu Of DOOOM!”