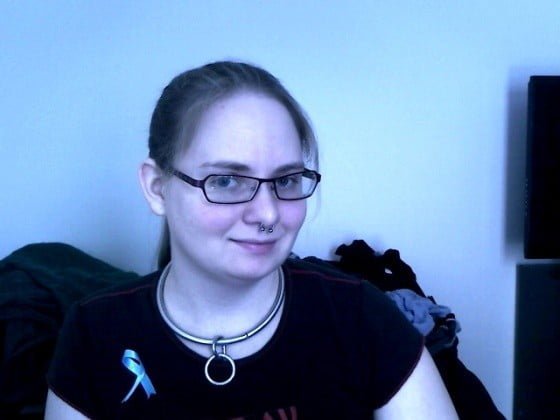 “See if you can write a blog post while I’m out tomorrow.”  Master likes pictures, too, so I added one.  I think I look a bit less disheveled than in the last post. I mean, I’m still tired and stuff.  Oh, and I’m blue looking because we already took down the cam lighting.  I guess I shouldn’t say “already.”  I mean, we’re moving into the house (finally) in two days.

In the first couple days following the break in, I got a bit anxious during the drive up into the driveway, and the walk into the house.  I mean, it was scary not knowing if someone had been in the house or not.  Luckily, no one has been in the house besides us since then, and I feel a lot safer now.  Master bought and installed a security system.  The thing even tells you if a window has been opened while you’re home (but, if you want to open the window yourself you can disarm it from the inside with the code), and it also can detect the sound of broken glass and will call the house to check on you if it hears any.  There’s a lot of features including a button for me to wear around my neck like an old lady so I can call an ambulance in case of emergency.  It’s scary needing a security system, but we do both feel a bit better with it.  We also got new security doors put on.

The exterminator has been out another three times since the initial time and as of this morning, they gave us the “all clear” on our house.  No buggies in sight (yay!) or out of sight either.  They will still come back every two months and spray for a year though.  Can’t be too careful with roaches.  Gross, gross, gross.  I do not do well with buggies.

So, we should have been excited about things a few weeks ago, but we really weren’t.  I mean, scary shit went down.  We’re both getting really excited now though.  We want to move in and make this place our own!  There are a lot of things to like about this place, and the joy is mounting again.  One thing we’ve been thinking about lately though, is the fact that this is probably not our last move.  We really, really wanted it to be, but after learning some things about the neighborhood we don’t think so.  We’re going to stay here for a few years at least, and we will probably move one last time after getting a realtor who is actually awesome and can help us find our forever home.  Either way, it’s nice to have the freedom to decide when and if we do want to move again.  We’re also never, ever moving in October again.  Ha ha!

Master bought me a little space heater the other day because “I could just picture you in your kitty nest napping and playing video games in front of it.”  So, it’s our little housewarming gift to ourselves.  It’s currently the only thing at the new place, but I look forward to bringing over some stuffies and blankies soon.  You know, homey touches.  =^^=

Physically, I’m hanging in there.  A move is a lot to take on, and in the middle of Halloween season, I’m feeling a bit shot.  I switch off between packing and sewing depending on how lightheaded I am at the time.  Truth be told, Master has been the superstar packer on this move though.  Tomorrow he’s breaking down the bed for the move so we’ll be camping out on the floor.  I stay up each night well past midnight sewing and packing.  I’m just looking forward to Tuesday.  Tuesday morning we’ll wake up in our new house and everything will be out of our apartment.  I mean, we’ll need to go back and steam vac the apartment rugs and have the place professionally cleaned (we want our deposit back, thank you very much!) but that’ll be just fine.

Master has had a few really promising interviews.  One job in particular has us pretty hopeful.  The only thing is, the guy who does the hiring went away on vacation and he won’t be back until Tuesday so we likely won’t get an offer until then at the earliest.  In the meantime, Master has been interviewing for any place that he can that matches his skillset and doing odd jobs (like fixing people’s computers, and focus groups and stuff).  We’re feeling hopeful, even though things are less than perfect.  One task and one day at a time, right now.

2 thoughts on “The In-Betweens”