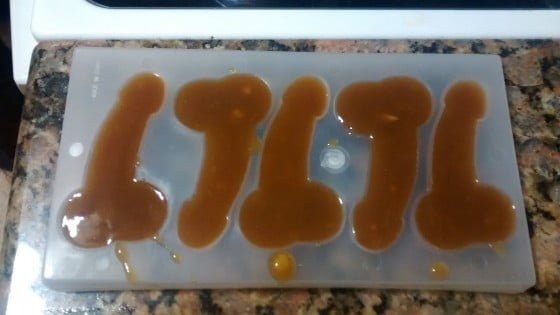 I’ve been doing better lately (POTS-wise) which has made for the return of DomestiKitty, kitchen edition.  It has been really nice to be cooking a lot of things from scratch again.  I used to cook about 90% from scratch, but when I got really sick I wasn’t even able to sit up, let alone stand long enough to cook.  I’m really very happy that things are getting to the point where cooking is possible again.

I’ve been feeling pretty experimental and have been trying out a lot of new recipes and things here and there.  It has been fun, and Master has been finding new recipes for us to try too.  Yesterday, we were doing some bulk cooking so we could freeze some stuff for later.  We made some home made teriyaki sauce and decided to freeze it for future use, since we almost never go through a whole batch at a time.  Of course, we ran out of “normal” ice cube trays so the penis ice cube tray made a return.  Not that it holds a lot, and there’s also star, puzzle, and fish shaped teriyaki, but those ones don’t make us laugh as hard.